The national poverty target is to reduce the national consistent poverty rate to 2 per cent or less of the population and to make Ireland one of the most socially inclusive States in the EU by 2025.

There is also a specific target for child poverty in the Roadmap for Social Inclusion.

There is also a poverty target at a European Union level.  The target, as set out in the European Pillar of Social Rights Action Plan is that ‘the number of people at risk of poverty or social exclusion should be reduced by at least 15 million by 2030, and out of them, at least 5 million should be children.’  EU member states are asked to define their own national targets, as a contribution to this common endeavour.  The targets set out in Ireland’s Roadmap for Social Inclusion will be Ireland’s contribution to this target.

How is poverty measured?

In trying to measure the extent of poverty, the most common approach has been to identify a poverty line (or lines) based on people’s disposable income (earned income after taxes and including all benefits). The European Commission and the United Nations (UN), among others, use a poverty line located at 60 per cent of median income. The median disposable income is the income of the middle person in society. This poverty line is the one adopted in the SILC survey. 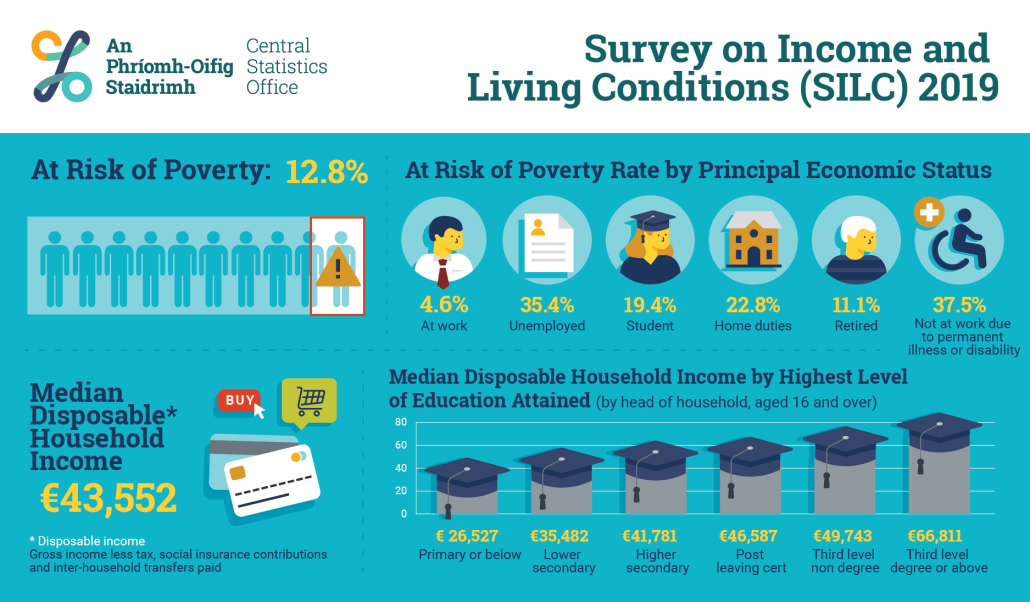 Irish data on poverty looks at those living below this 60% line and is published each year by the Central Statistics Office (CSO) using results from a comprehensive national survey called SILC (Survey on Income and Living Conditions).

The Survey on Income and Living Conditions contains data on three different measurements of poverty: at-risk-of-poverty, experiencing enforced deprivation and consistent poverty. The most up-to-date data available on poverty in Ireland comes from the 2019 SILC survey, published in October 2020.

At risk of poverty

Households that are excluded and marginalised from consuming goods and services which are considered the norm for other people in society, due to an inability to afford them, are considered to be deprived. The identification of the marginalised or deprived is currently achieved on the basis of a set of eleven basic deprivation indicators:

Individuals who experience two or more of the eleven listed items are considered to be experiencing enforced deprivation. This is the basis for calculating the deprivation rate.

The consistent poverty measure is defined as people who are both at risk of poverty and experiencing enforced deprivation. 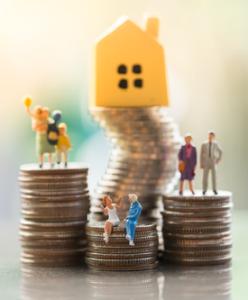 At risk of poverty or social exclusion (AROPE)

What is social inclusion?

The Roadmap for Social Inclusion 2020-2025 defines the achievement of social inclusion as:

“Social Inclusion is achieved when people have access to sufficient income, resources and services to enable them to play an active part in their communities and participate in activities that are considered the norm for people in society generally.”

The National Anti-Poverty Strategy (NAPS) published by Government in 1997 adopted the following definition of poverty:

“People are living in poverty if their income and resources (material, cultural and social) are so inadequate as to preclude them from having a standard of living that is regarded as acceptable by Irish society generally. As a result of inadequate income and resources people may be excluded and marginalised from participating in activities that are considered the norm for other people in society.”